The lower levels of the ship

From our first few weeks of the cruise, all we knew about the engineers and engine room was that they drink lots of tea and they play loud music while dancing and working somewhere down below.  However, the engineers are responsible for keeping the ship watertight, powered (electrics and hydraulics), and liveable (they are in charge of the AC, fridges, plumbing, sewage and freshwater production).  Every so often, an alarm will sound in the living spaces of the ship.  This means the engineer on duty has 3 minutes, night or day, to get to the control room and acknowledge the alarm.

The deck plans show that the engine rooms cover an entire deck beneath the lower accommodation, though it also extends vertically through different spaces on the ship.  There are myriad doors and staircases dotted about that lead down into engine room spaces.  This means that when we need an engineer to fix things, they sometimes pop out like magic from unexpected places.  This all gives a rather mysterious impression to the engine room.  So when George (the “chief”) offered to take us on a tour, we gladly accepted.

The main entrance to the engine room is through one of the hidden doors and staircases at the back of the engineers changing room (where you wouldn’t normally venture).  At the bottom of the stairs is the control room.  The control room has windows over the four engines which power the ship.   Normally, the ship has two engines running, a third on standby and fourth that the engineers can service.   Each of the four engines provides about 1700 kW, with a total average fuel consumption of 11 tonnes per day.   These engines, when running, are about 90 deg C, and when on standby are still at 80 deg C.  The exhaust temperatures are about 300 deg C.  The room with the engines in it was hot and noisy.

You may expect an engine room to be super dirty, full of grease and oil, but surprisingly, it was very clean. Even though we were climbing over pipes and under cables, ducking through low clearance spaces, and around bits of machinery, we didn’t end up filthy.  Towards the bow of the ship, we visited the workshop, sewage room, purifier room, water tanks and the salt water intake for science.  When we visited, the engineers were servicing one of the purifiers (which purifies the fuel before its burning).  In this space, the engineers can typically be found dancing while working to loud music.  From here, we took a different staircase back up to the rest of the ship. 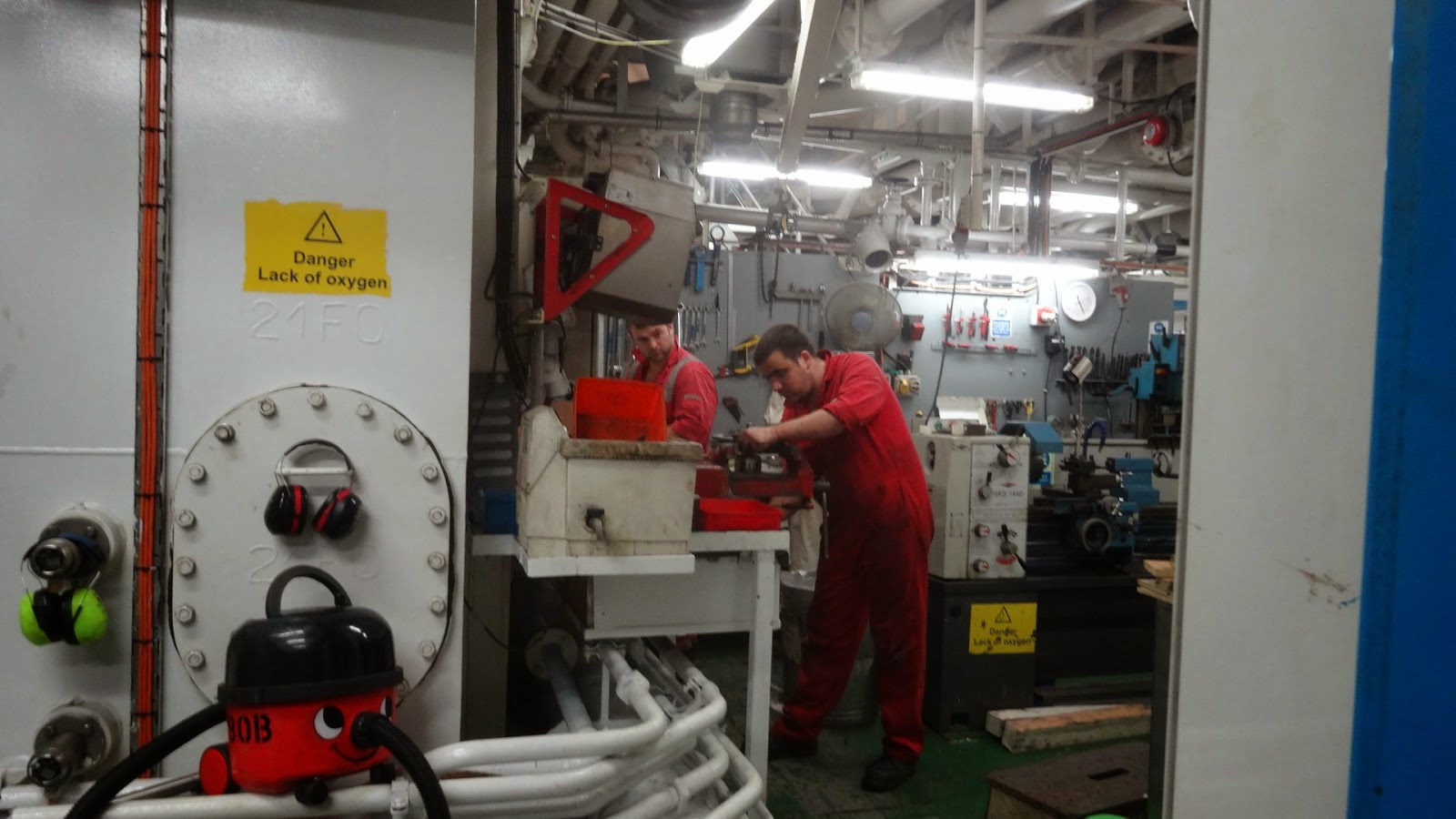 Posted by Eleanor Frajka-Williams at 14:57